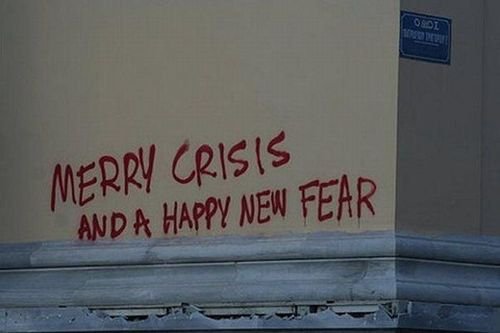 “merry crisis and a happy new fear” by robinsoncaruso is licensed under CC BY-NC-ND 2.0

It’s February 16th, 2022, and the latest fear on the news is an “imminent” war with Russia and Ukraine. Of course, this has been going for a month now, probably longer, but has recently become the hot fear cycle. For the last two years, it was Covid and the end of the world with that. Then before that, it was how Trump would start nuclear war with North Korea as well as with Iran, both of which did not happen.

Then, when Obama was elected in 2008, that was the end of the world for many as he was labeled the antichrist, which is really not cool. Then there was the housing market collapse before him, then George Bush Jr. got elected President in 2000 which was a matter of “life or death”. The list goes on and on.

What is causing this? Why are we constantly buying the fear that the media sells us? According to a New York Times article back in 2021, called Bad News Bias, over 80% of the coverage of Covid alone was negative (Source: Bad News Bias).

And then, an article by the Pew Research Center on October 15th, 2020, said that 64% of Americans say that social media have mostly a negative effect on the way things are going in the U.S. (source: Pew Center Survey). Social media compounds the issue by allowing everyone to dump their opinions all over the internet, many of which just inflame others or are agreed with by others.

This all leads me to my original question but maybe the question has already been answered. The media sells us what we want. If we, as a person, group of people or the general public, keep giving into constant negativity and fear, the media will only sell us what we want. I firmly believe that those in political power are a representation of the public at hand. Sure, some people are elected by razor thin margins, and in those instances, it’s different, but when a city, municipality, town or nation, vote overwhelmingly for a person, that person reflects the ideals of the people.

The same goes with the media. If we keep buying their content and get sucked into the fear, then spread the fear over the internet and in talk with others, then the media is essentially winning. All at the same time, they advertise their products to us during commercials. So not only are they winning our hearts and minds, they are also winning our pocketbooks.

We are currently living in a fear based society. And this means, every couple of months, there is some new monster that is created by the media for us to be afraid of. Whether it’s the Russians invading Ukraine, or a new Covid variant, or protests, it’s all about fear. It’s time for us to take a step back and recognize how we are being manipulated on a continual basis and put our faith, beliefs and sanity into something else besides the news. Because from the looks of it, they are wrong a majority of the time. Don’t believe me? Start with the local meteorology predictions and see how often they are right. Then go from there.